Overtime pay will now be available to an additional 1.3 million American workers as a result of a final rule issued by the U.S. Department of Labor (“DOL”) on September 24, 2019. The updated overtime pay rule increases the earnings limit needed to exempt certain employees from the Fair Labor Standards Act’s (“FLSA”) overtime pay and minimum wage requirements.

Additionally, the updated rule permits employers to allocate a part of qualifying bonuses and/or commissions towards reaching the required salary level. These new limits were calculated to account for increases in employee wages since the limits had not been updated since 2004.

The final rule is effective starting on January 1, 2020.

Key Numbers from the New Rule

It is estimated that the new overtime pay rule will result in an additional $298.8 million in extra pay that roughly 1.3 million workers who were previously ineligible for overtime will now receive each year. The new salary requirement is $684 per week.

The base rate for employees in the motion picture industry will be $1,043 per week.

What Determines if an Employee Falls Within One of the Exemptions? 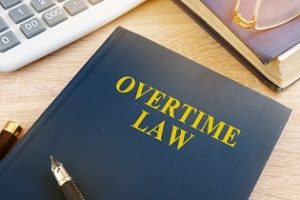 Generally, an employee must be salaried to qualify for an exemption to the overtime pay rule. This means that they are paid a fixed rate which is not subject to reductions based on quality or quantity of their output. This is known as the “salary basis test.” The salary level of $684 per week must be met as well. Finally, the employee must perform primarily executive, professional, or administrative duties, as are detailed in the DOL’s regulations. This is known as the “duties test.”

Certain employees, such as doctors and lawyers, are not subject to the salary basis or salary level tests. Highly compensated employees (“HCEs”) who earn more than $107,432 per year and satisfy the duties test are also provided an exemption.

What If a State Has Its Own Overtime Pay Laws?

What Are the Costs of the New Overtime Pay Rule?

The DOL quantified three costs to employers: a) the cost of familiarizing themselves with new regulations; b) the cost of adjustments; and c) managerial costs. They arrived at a total estimated cost to employers of $173.3 million, assuming a 7% discount rate.

On March 29, 2019, the DOL proposed a rule which would update regular rate requirements under Section 7(e).  Current rules discourage employers from including certain perks in their employee’s compensation, as it may be included in calculating an employees’ regular rate of pay.

The new rule proposes that employers be allowed to exclude the following costs from an employee’s pay rate: gym access and wellness programs, payments for unused sick leave, reimbursed expenses, travel expenses subject to certain regulatory requirements, discretionary bonuses, benefit plans, and tuition programs such as those involving repayment of educational debt. The comment period for this rule ended on June 12, 2019.

The FLSA applies to enterprises defined as follows: (1) those that have an annual dollar volume of sales or business done of at least $500,000; or (2) hospitals, businesses providing medical or nursing care for residents, schools and preschools, and government agencies.

Individual coverage of the FLSA applies to employees if their work regularly involves them in commerce between States (“interstate commerce”).

This article is provided for educational purposes only. It is not to be interpreted as legal advice or an opinion in regard to any topic discussed. The article should not be used as a substitute for legal advice from a licensed attorney in your state. Every situation is different and circumstances vary widely depending on the governing state law, policy provisions, and related considerations.